Belated congratulations to the 2019 'Liverpool team' who should have begun the defence of their trophy on Thursday 25th June at Worplesdon Golf Club in Surrey. CG Winners 2019
The Cyril Gray Tournament is an over 50s foursomes competition for three pairs and is held each June for 32 of the participating Halford Hewitt Schools. 'Liverpool' reached the first final in 1971 when we came up short against Wrekin. Some 45 years later, in 2016, success was at last achieved when Rossall were defeated in that year's final.

Last June, our squad of Tim Apel and Tom Kinloch; Jono Greenough and Peter Desmond; and Captain, Mark Horton and Mike Greenough overcame Canford (2-1), Dulwich (2.5 - 0.5), Wrekin (2-1), and Stowe (2-1) before, again, coming up against north-west rivals, Rossall, who were defeated by two matches to one.

We salute the team on its magnificent achievement and wish all OL golfers the best of fortune when they return to the fray. 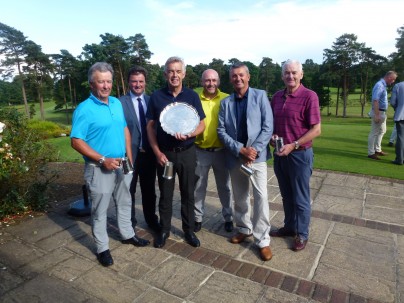 Despite the disappointment of this year's cancellation and a 1st round draw with Framlingham, read on for an insight int… More... Donation from Lerpoolian Roger Peach leads to a "double matching" donation from Anonymous Benefactor in completing the r… More...