Who was TR Wilton?

You've heard of the Wilton Scholar programme. You remember The Wilton Gates. You may even associate him with a rebus on the sundial in the Masters' Garden. Read on and discover the man behind it all. [The Lerpoolians are pleased to reproduce T.R. Wilton's obituary, originally published in the 1966 College Magazine. Some of its detail has been updated and a few relevant photographs have also been attached.]

T. R. Wilton died on September 19th, 1965, and by his death, the College lost one who, among all the interests of a long and full life, gave it a dominant place in devotion and service.

He was born at Fazakerley on December 21st, 1877, the younger son of the second marriage of James Wilton. He went to the College in 1889 and stayed there until 1897, developing in that period an interest in Rugby football which remained with him for the rest of his life; in his last year, he was captain of the 1st XV, and he subsequently played for Lancashire.

In 1897 he went up to Jesus College, Cambridge, where he was elected to an Exhibition and graduated with second-class honours in the Mechanical Sciences Tripos. He afterwards received professional training as a civil engineer under Mr. A. G. Lyster, then engineer-in-chief of the Mersey Docks and Harbour Board, where he subsequently remained as an assistant until he entered private practice. He later formed, in partnership with Mr G.Kenyon Bell, the firm of Wilton & Bell, consulting engineers, with headquarters in Liverpool and later an office in London, specializing in dock and harbour work.

At the outbreak of the first World War, having previously served in the Territorial Force, he was re-commissioned to command his old unit, the Works Company of the Lancashire Fortress Engineers, which he took to Gallipoli in May 1915; he was mentioned in dispatches for that campaign. Subsequently, he served on the staff of the Director of Works of the Egyptian Expeditionary Force and with the Military Mission to the King of the Hedjazin Arabia. 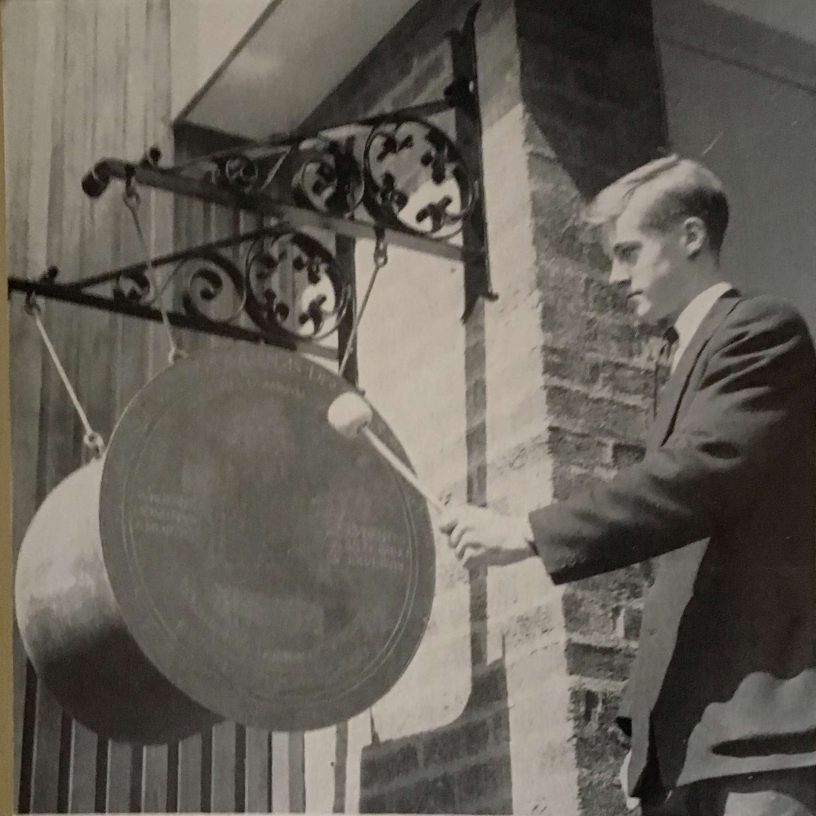 IN Lightbody and the Wilton Gong outside the Dining Hall

Returning after the war he was, in 1920, appointed Associate Professor of Dock and Harbour Engineering at Liverpool University and the Institution of Civil Engineers invited him to deliver the two Vernon-Harcourt Lectures for the season 1922-1923. He retired from the partnership with Mr Bell in 1937 and from the University in 1953.

During a busy professional life, he found time for other activities. In 1912, he became one of the three Honorary Treasurers of the College, holding this post, latterly as Senior Treasurer, for 25 years and retiring in1937. He was subsequently elected a Vice- President of the school. In 1949 he left Wallasey, where he had lived for many years and, buying a piece of land in Park Avenue, Mossley Hill, had a house built on part of it and sold the remainder to the school for a playing field and tennis court. Thus, established close to the school, he gave it a much-increased degree of attention.

The welfare of the school had long been one of his pre-occupations, increasingly so over time. In his mind, there continually revolved schemes for its benefit, and he also became a considerable material benefactor, giving over a period of years the Lower Gate (below the Memorial Gate), the Upper Gates, the Dyson Gate, the gate between Beechlands and the Masters’ Garden, the sundial near the Lower School Yard, the gong which hangs outside the Dining Hall and the Grace Plate, made from fragments of a bomb that fell in the school grounds near the Lower School used in the Dining Hall. 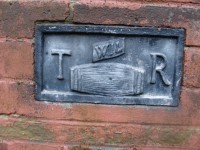 TR Wilton's rebus on the sundial originally in the Masters' Garden

This list by no means exhausts his gifts, and it may be added as an indication of his general approach that when appropriate, they were made on condition that the school on its side should contribute by having some ancillary piece of work carried out.

He was much interested in gardening, in particular, in the laying out and beautifying of grounds with trees and shrubs, and made his considerable knowledge freely available to the school. The design of much of the planting on the grounds is due to him.

T. R. Wilton formed deep and tenaciously held attachments in his life, and high among them were those to his old school and college. He had vision, originality, a clear and incisive mind, an excellent memory, a capacity for absorbing himself in anything that interested him and a strongly developed determination to achieve what he wanted. He was extremely sociable and a vigorous talker. He did not suffer fools gladly, and could be impatient with those less well-endowed than himself; he could also be sarcastic occasionally and did not always spare the feelings of those less strongly attached than he was to the causes he had at heart. 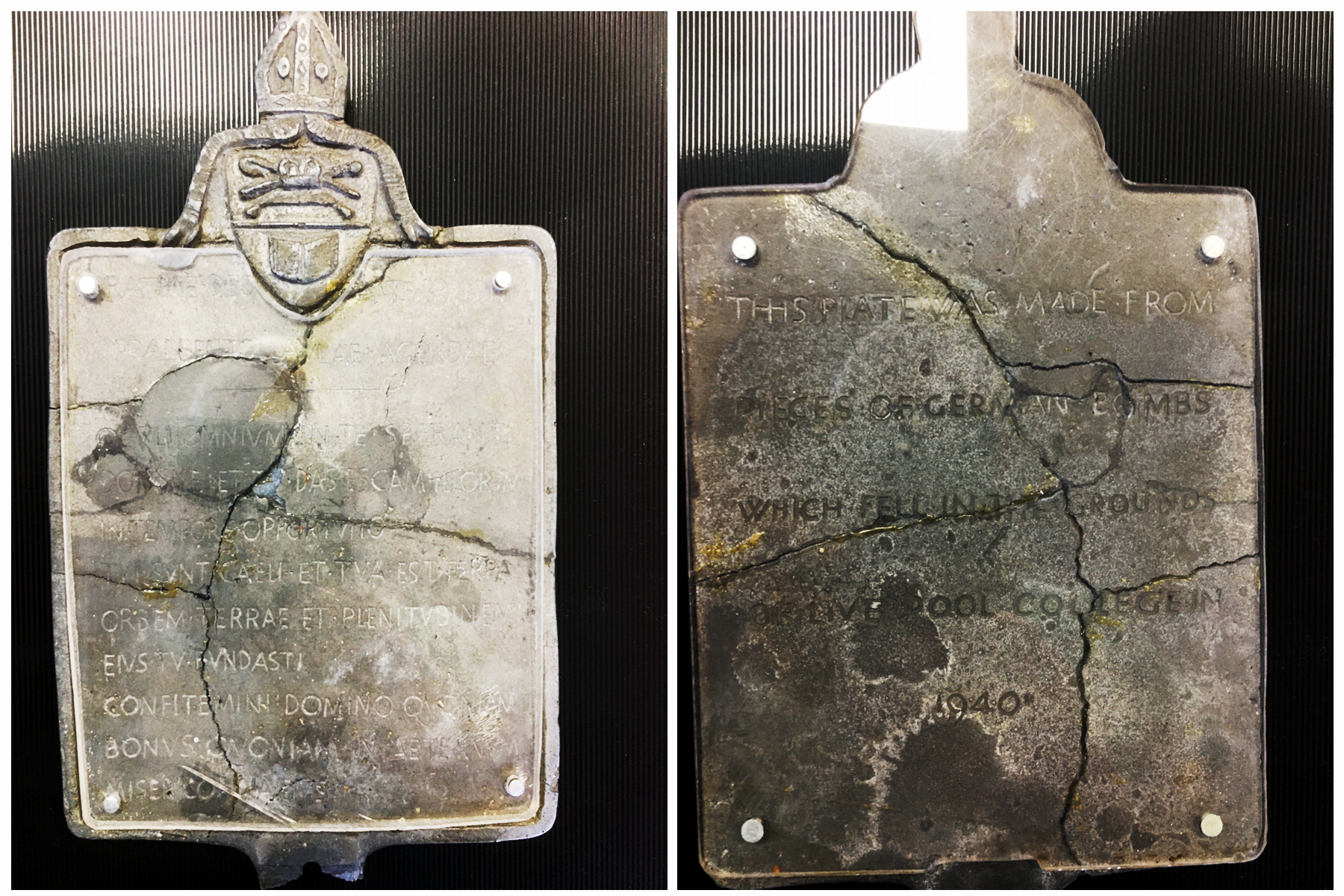 Front & reverse of the Grace Plate constructed from German Bomb

fragments collected from the College Grounds, 1940

When things of which he disapproved were done in the school, he left those responsible in no doubt as to his views. But he was never malicious, and he did much good by stealth.

His health began to decline about two years ago, and he became increasingly unhappy and frustrated as his activities became more circumscribed. He died, in his home near the Lower School, peacefully and quickly at the last, and his ashes are scattered in one of the gardens of the school to which he gave such long and devoted service.

His legacy lives on in the Trust Fund he so generously established and which, as recorded in the Wilton Scholars' article of 11th March 2021, underpins the work undertaken in the modern College by that programnme. Who was TR Wilton?

You've heard of the Wilton Scholar programme. You remember The Wilton Gates. You may even associate him with a rebus on … More... Ian Douglas (1951) has kindly submitted these two photos for our photo albums More... In celebration of a so-called 'minor' College sporting activity. More... When one school closes and another opens its doors

When the schools collided........my memories of leaving Huyton College and starting Liverpool College while halfway through my GCSEs. More... What makes the College of 2021 so outstanding?

At the last 'face to face' Foundation AGM in Jan 2020, Vice Principal, Hannah Cassidy, endeavoured to answer the above question when, through a series… More...