There must have been something in the water (or, at least, the school dinners).

Alan Ashcroft wasn't the only member of staff to play international rugby. I am indebted to Jim McMaster for sharing some fascinating further insights into the teaching staff during the 1950s.

John Denning Robins (17 May 1926 – 21 February 2007), was a Welsh international rugby union player who attained 11 caps for Wales between 1950 and 1953. A prop, he toured New Zealand and Australia with the British and Irish Lions in 1950 and became the first Lions coach, on the 1966 British Lions tour to Australia and New Zealand.

Robins was born in Cardiff. He was educated at Llandaff Cathedral School and Wellington School. He joined the Royal Navy and served in World War II. He played for England in two wartime Services Internationals. He trained as a teacher at Loughborough and returned there as a lecturer before taking up the post of Director of Physical Education and Recreation at Sheffield University and subsequently the same position at University College, Cardiff.

Robins played for Leicester Tigers and was a noted goal-kicker despite being a prop.

Can any of our members share any further information or memories of him? Who amongst us are contributors to Wikipedia and who can update Johnnie's page?

Jim also recalls another rugby international, this time English, who taught at Liverpool College. A slightly briefer entry from Wikipedia this time.

He was born in Widnes, Lancashire and played as a flanker for Liverpool rugby club. He was capped thirteen times for England between 1954 and 1959. He also took part in the British Lions tour of South Africa, playing in the first test match. Although the Lions won the game 23-22, Higgins was carried off the field with a broken leg

Jim's final comment to me was that there must be some famous cricketers and hockey players who either were pupils or teachers at Liverpool College.

Write in and tell us what you know by clicking on the "Post a Comment" section at the bottom of this article. 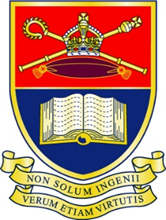